Look at the picture. What landmarks are there in Moscow? Why is it a special place to be? Listen, read and check.

Moscow is a great city where the old and the new are harmoniously exist side by side. There are lots of things to see when you are in this city, like Red Square, the Kremlin and the Bolshoi Theatre. The buildings, the events and the people are all amazing!

You can get to Moscow by train. Or you can arrive in the city by plane. The oldest and one of the biggest airports in Russia is Vnukovo airport. It is over 70 years old and it’s a wonderful place with a big glass ceiling.

There are a lot of hotels to choose from. One of the best hotels is the Moscow hotel in the centre of the city right in Red Square!

After Saint Basil’s, where is the next best place to visit? The Bolshoi Theatre of course! It is one of the most famous theatres in the world. It is very beautiful, almost like a palace. It is over 200 years old and its dancers are some of the best. The show Swan Lake is the most popular. There are lots of public squares near the theatre where you can enjoy ice cream and watch passers-by.

Travelling around the world is the best way to see new places and meet new people. Moscow isn’t a place to miss! 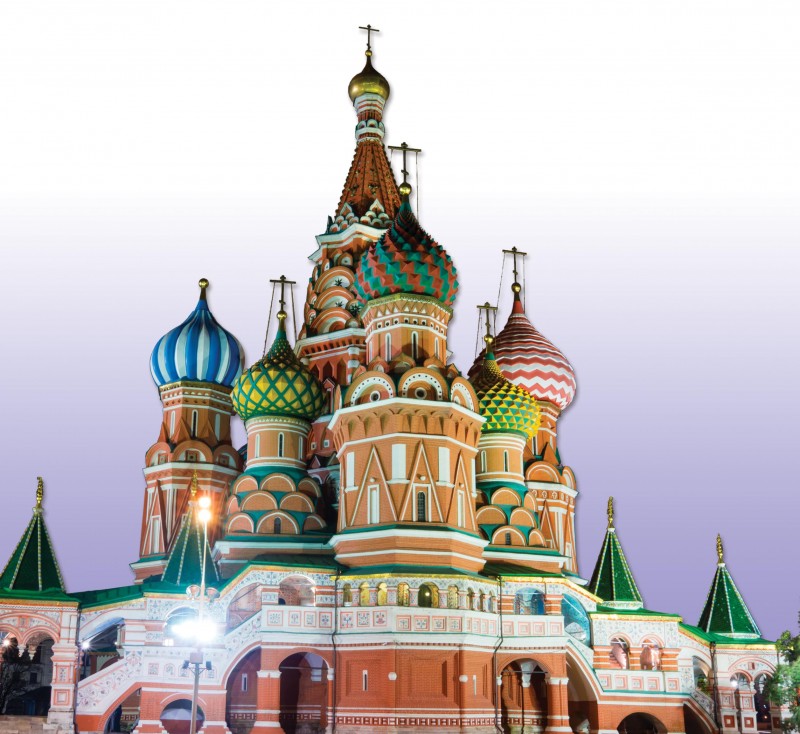 3  Where is Saint Basil’s Cathedral?

4  How old is Saint Basil’s Cathedral?

5  What is the Bolshoi Theatre similar to?

6  Which is the most famous show?

7  What else can you do near the Bolshoi theatre?

Write two reasons why someone should visit Moscow.

Use the Internet to find information about other landmarks in Moscow. Create a poster.

Look at the photos and the subheadings in the text. What do you know about each place? What else would you like to know about them?

Listen to and read the text. Does it answer your questions?

Can you believe that an old circus place looks like a queen’s castle today? Well, it’s true! In the very centre of Moscow, in Vozdvizhenka Street, there is an amazing building. It looks like a castle from a fairy-tale. It also has an interesting story.

The extraordinary design of that building is the result of Arseniy Morozov’s – a very rich and eccentric man – effort to impress everyone; even his own mother. How? By building a house similarto a large Portuguese mansion with the name Pena Palace.

Today’s building in Vozdvizhenka Street attracts a lot of people who want to take snapshots of this wonderful building. Lots of important people lived in this house. Today, the building is the House of Friendship With Peoples of Foreign Countries and many ceremonies take place there. 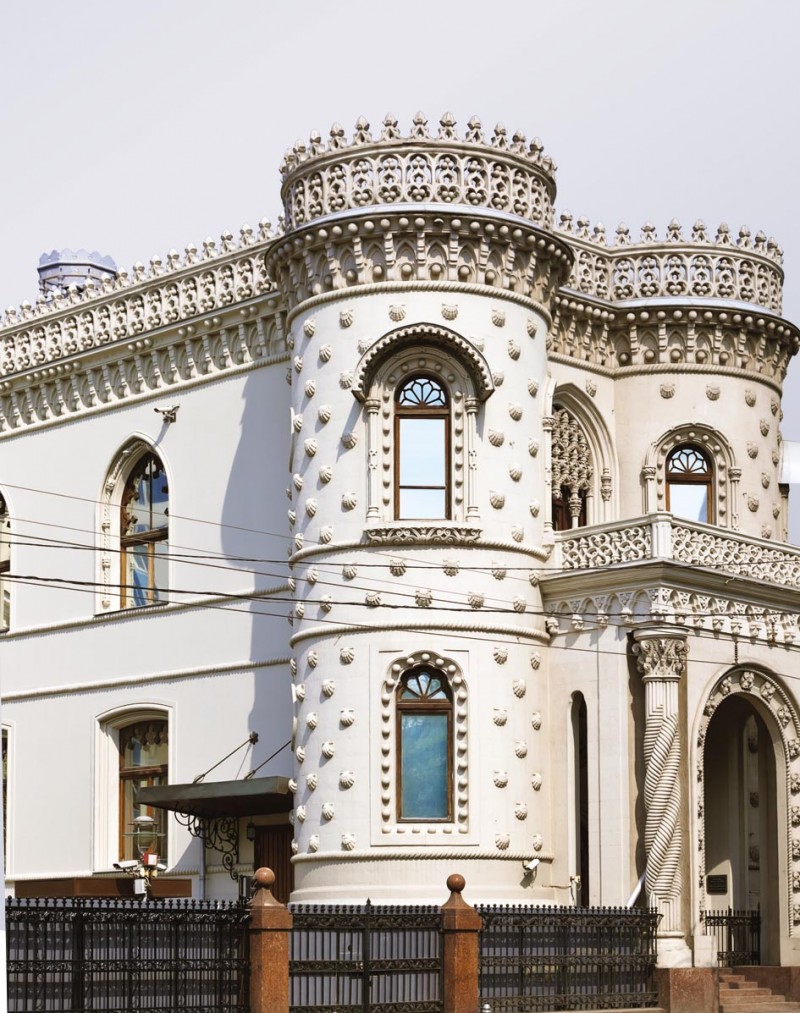 “The house with animals”

Another amazing building is on Chistoprudny Boulevard. It is a modern 21st century house.

The building makes this part of the boulevard look beautiful. You can see owls, ducks, lions, deer, flowers, plants and also fairy-tale creatures on its walls. The house is the work of the artist Sergey Vashkov. This house – one of his first works as an architect at that time – has the nickname “the house with animals” because of all the images of animals and creatures on its walls. Today, people still rent the flats in this building. 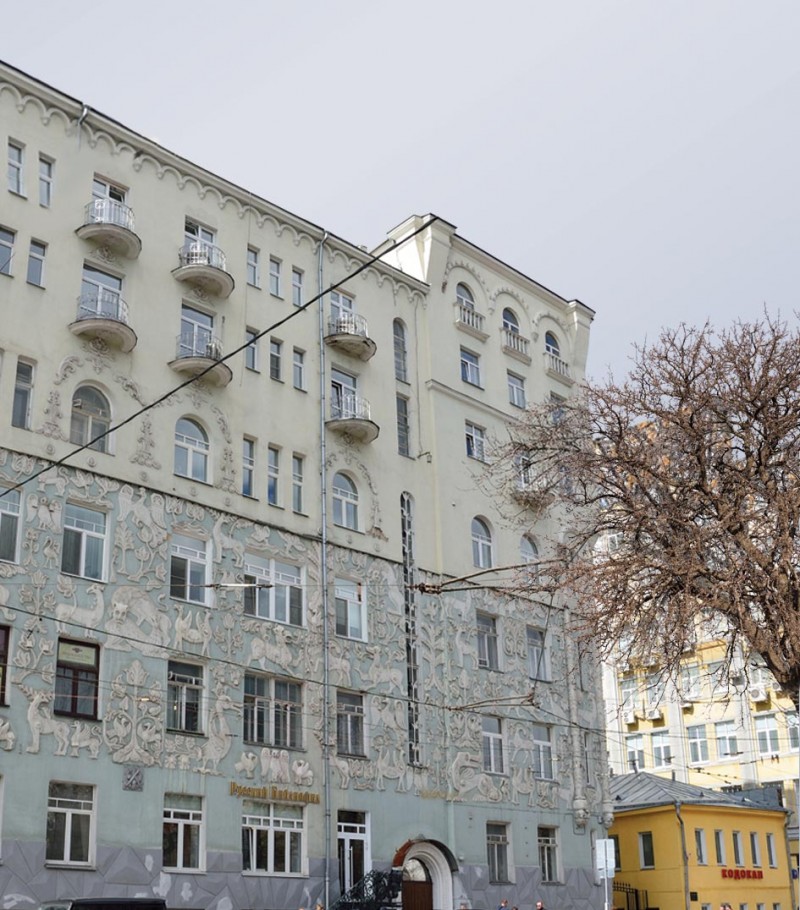 These are only a few of unusual houses you can see in Moscow and each of them has its own story to tell you.

Which building do you think is the most unusual? Why? 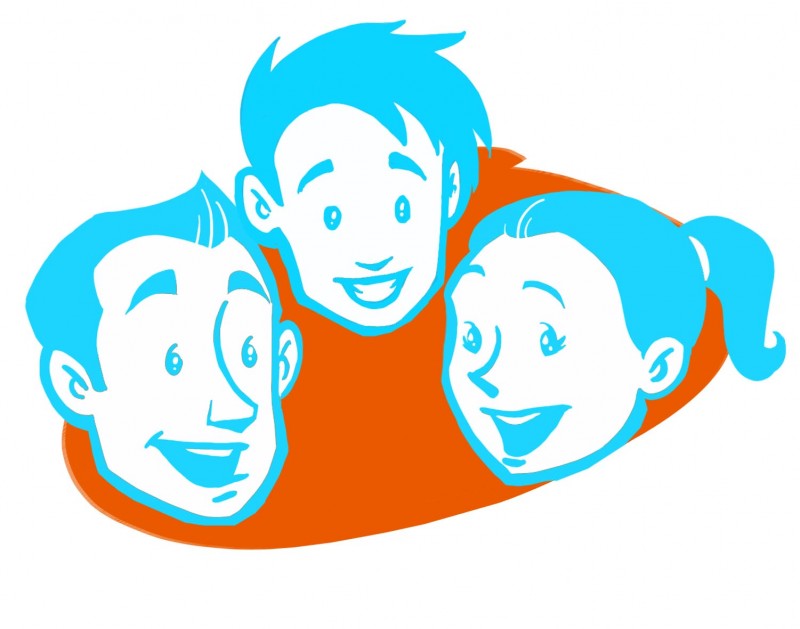 Collect information about other unusual buildings in Moscow. Prepare a poster for the class. Use your poster to present them to the class.

What is school life like in Moscow? Listen and read to find out. 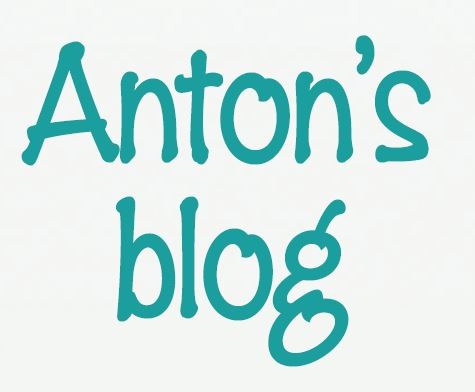 In autumn and spring I ride my bike to school because it’s faster than walking. I can leave it at the front steps of the school. The school has CCTV system so I don’t worry about my bike at all. Breakfast at school is always at 10.15 am. On Fridays, it’s usually pancakes. I like them with condensed milk!

On Tuesdays, after breakfast, it’s time for my favourite subject – History. We often watch films. I like reading students’ books more when there is also a video. This week’s video is about Vikings. It’s cool! After the video, there is usually a test on tablets. I really want to answer all the questions correctly!

On Mondays at 3.45 pm I go to the Robotics Club of the Technical Creative Work Centre. There is a city contest this month and I’m excited. Our robot-assistant is almost ready, but we need to think about the speed switching mode. I hope we’ll win and thenI’m sure that we’ll be on TV.

Later in the afternoon I usually check my progress on my electronic mark-book. Unfortunately, my mark in Geography is not that good. So, this month I have to watch video lectures and draw a map.

Every year my school organises lots of events; this year, it’s a talents festival. I’m at the concert and that’s why I rehearse a lot. I don’t think that I’m a good singer. I’m shy on stage. I have to talk to my teacher about this. Also, my class takes part in the Museums Parks Estates project and I have to go to the Museum of Cosmonautics to collect information. Amazing, isn’t it?

I think schooldays are the best! What do you think? What do you usually do? Do you have fun at school? 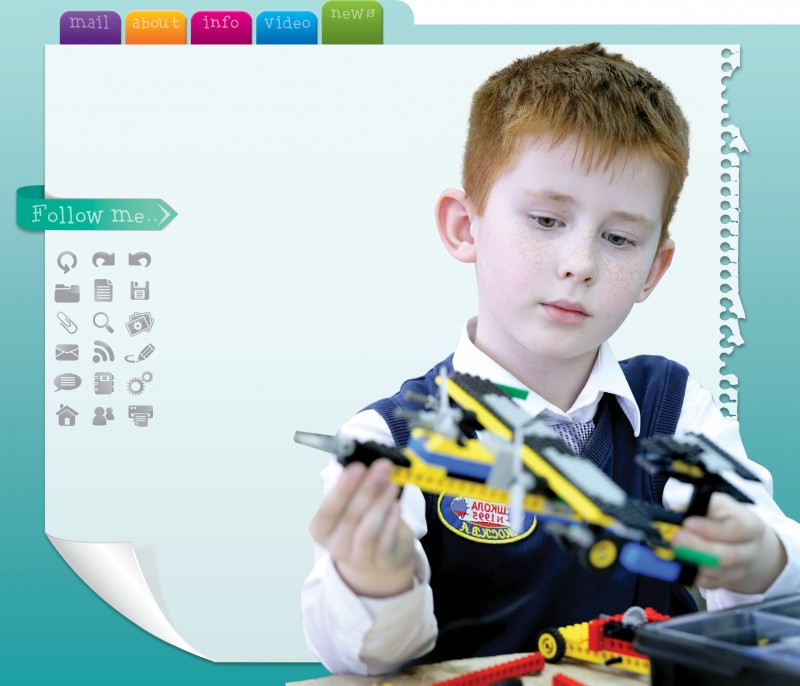 1 Anton feels safe at school because there is

2 For breakfast he likes

3 He likes History because

4 He is excited because

5 For his Geography class he has to

6 For the talents festival Anton

7 Anton has to go to the Museum of Cosmonautics because

Compare your school life to Anton’s.

Find more information about school clubs in Moscow. Write a short text. Present it to the class.

Danilovsky Market is one of the largest markets in the centre of Moscow with a long and interesting history. Not far from the market, there is a thirteenth-century monastery. People still use the monastery today and gather around it. It is no surprise, then, that there is also a market nearby.

The design of Danilovsky Market, which comes from architects Felix Novikov and Gabriel Akulov, makes the building look like a giant turtle.

In the 21st century markets are not just for shopping, they are also places where people can meet and have fun; and Danilovsky Market is no exception. In Danilovsky Market you can buy high-quality fresh products from all over the world. But that’s not all. You can also come and have a delicious dinner in one of its many cafés. You can’t feel bored in Danilovsky Market. Lots of cultural events take place there. There are various activities, like festivals, musical performances, fairs, lectures and master classes. Danilovsky Market has something for everyone. 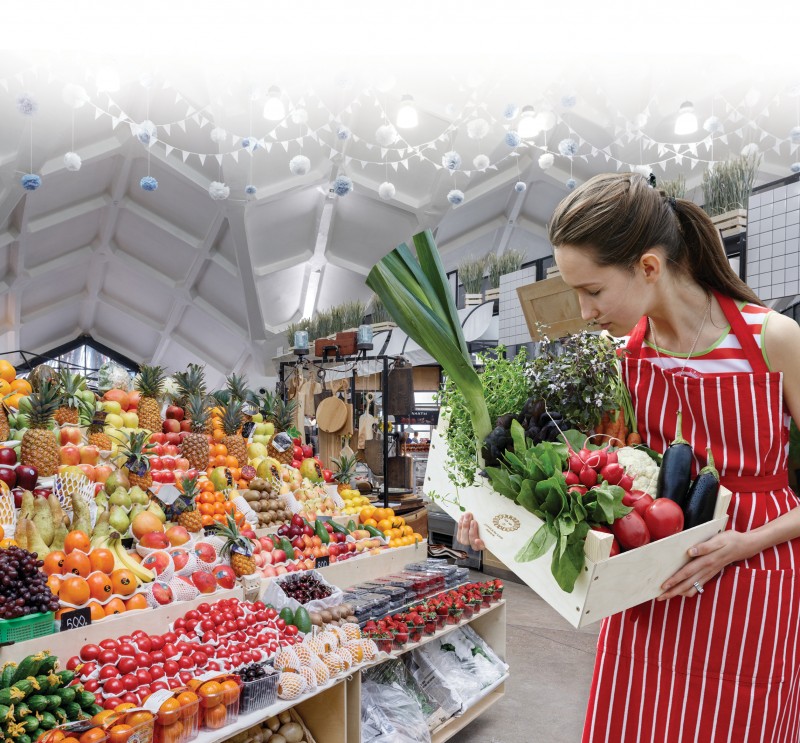 1 Near the market there is a

2 The designers of that market are

4 In this market, people can buy

5 Cultural events that take place in this market include

Write a few things that impressed you in the text. Compare with your partner.

Collect information about another market in Moscow. Where is it? What is nearby? What can you buy there? What else can you do there? Present the market to the class.

What do you know about Volkhonka Street? Why is it important?
Listen and read to find out.

In Moscow’s Central Administrative District, between Prechistenskaya Embankment and Znamenka Street, lies one of the oldest streets in the city – Volkhonka Street.

Its history is exciting. During the 14th century, over 600 years ago, the street connected the Kremlin with the village of Semchinskoye. However, up until 1658 the actual name of the street was “Chertolskaya”. This is because it ended at the border of the city in the Chertolye area.

The street was popular among merchants, craftsmen and government officials. During the reign of Ivan the Terrible in the 16th century, royal servants, officials as well as nobles built their houses along that street. During the reign of Aleksey Mikhailovich in the 17th century, the street changed its name to Prechistenskaya. However, local people preferred to call it just Prechistenka.

In the 17th century, the noble Prozorovsky, Sheremetev and Yushkov families moved into houses along Prechistenka. In the 18th century, Empress Catherine the Great, lived in a wooden palace near the street. Towards the end of the 18th century the street got its new name; it became Volkhonka Street.

There are many landmarks in this 620-metre-long street. Near Prechistenskye Vorota Square stands the Cathedral of Christ the Saviour. You can also find many important museums and galleries in Volkhonka Street. There’s the Pushkin State Museum of Fine Arts. There’s also the Moscow State Art Gallery of People's Artist of the USSR by Ilya Glazunov. All this makes Volkhonka Street one of the most famous streets in Russia. 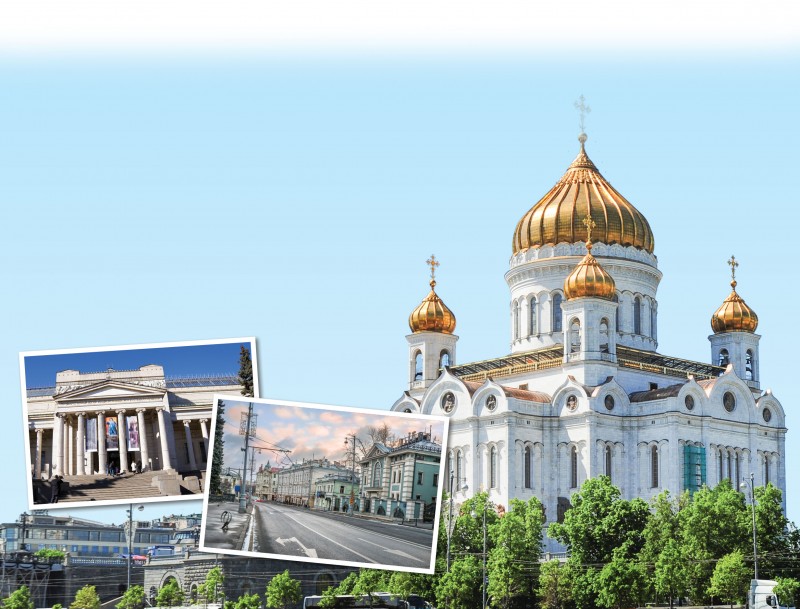 1 How many times did the street change its names? What were they?

2 Where did the street lead to during the 14th century?

3 Who lived in that street in the 16th century?

4 Who lived in that street in the 17th century?

5 Name three landmarks people can find in that street.

Collect information about another important street in Moscow. Present your information to the class.

Look at the photos and the title of the text. What can someone do there? Listen and read to find out.

Have you ever seen a boat racing competition? Well, I’ve just done that! I’ve just returned from the Krylatskoye Rowing Canal in Moscow where I watched the Dragon Boat World Championship. It was such an amazing experience; I’ll never forget it.

It is the first time I’ve been to the Krylatskoye Rowing Canal and it is a fantastic sports complex. They built this place in 1973 for the European boat racing championships. In the 1980 summer Olympics, boat racing and paddling competitions between some of the world’s best rowers took place in the very same place!

Today, it is still one of the best sports venues in Europe. Lots of sports events and festivals take place there. Also, sports clubs use the facilities to train. It’s huge and covers an area of 107.4 hectares. It has a new boathouse, conditions for training plus 165 rooms for athletes to stay in during competitions. It’s also got its own gyms, rowing and swimming pools and seats for 4500 spectators.

I loved my visit to the Krylatskoye Rowing Canal. It is certainly one of the most modern sports centres in the world. What about you, bloggers? Have you visited any place like that? Share your thoughts with me! 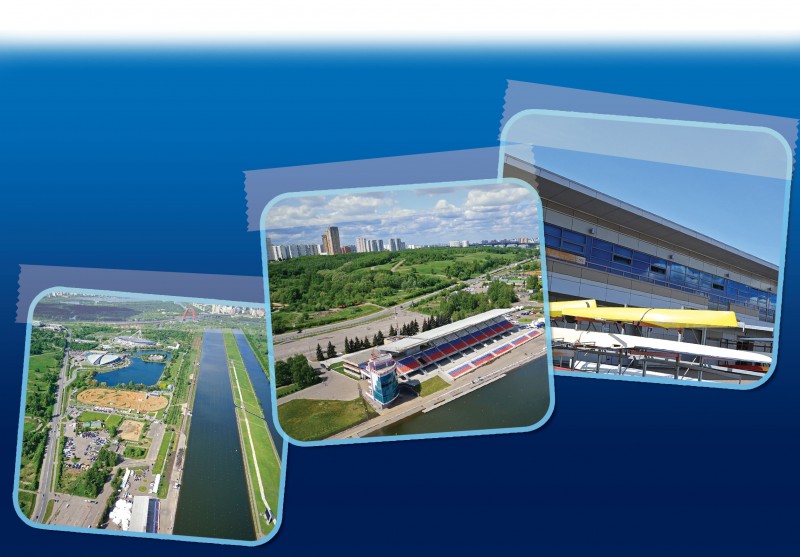 Read the text again and decide if the sentences are T (true) or F (false).

Tell the class two facts about the Krylatskoye Rowing Canal that impressed you.

Imagine you have just visited another sports complex in Moscow. Use the Internet to collect information about the sports complex you have visited and the event you have watched. Write a blog entry similar to the one in Ex.1.